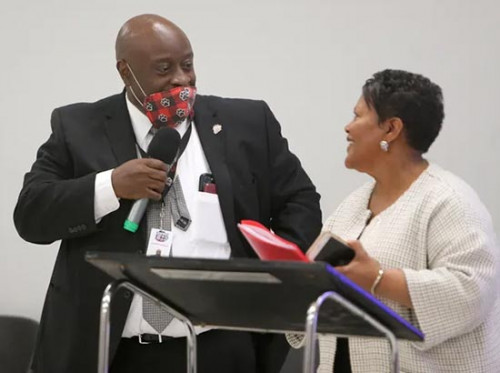 CANTON – What is your why?

For Jeff Talbert, he found inspiration in the "dedicated teachers and community members" of his youth to become an educator. Talbert, superintendent of Canton City Schools, spoke Wednesday night at Greater Stark County Urban League's "Beyond the Classroom" program. About 50 people – some of them school officials – attended the community event. Talbert presented an abbreviated "State of the Schools" report and took questions from community members. He said the central theme of this school year has been why something is done.

"We believe why you do something is the most important thing," Talbert told the audience. "We say people don't buy what you do. They buy why you do it."
Talbert said he wanted to inspire and teach future generations of learners like him. "That's my why." How the district is going about helping students reach their purpose carried the rest of the night.  Senior Taylor Vickers raised several questions about student council and an imbalance of resources. Talbert said he would meet with her to discuss her concerns. Ceaira Lucious, a nurse, asked Talbert if he considered smaller class sizes for teachers.
"They do make a difference," but it is not logistically possible, Talbert said. Talbert also explained educational equity after Hector McDaniel, president of Stark County NAACP, asked several questions on the subject. He said it means "you get what you need" to succeed. "You give each kid what they need where they are," Talbert said.

Before the question session, Talbert said the district has three core values – excellence, leadership and community – at the heart of its overall mission.
He also said COVID-19 continues to be a part of the learning environment in the district. They still regulate close contact and ask all to wash hands regularly. They also have a mask mandate that has caused some flak. "We do it because we value community," Talbert said. He also told those present that the shutdowns cost many students nearly 1.5 years of instruction. He said those students returned to the classrooms this fall behind where they should be in their education. He said the masks keep the students in the classroom because they do not need to quarantine the same as unmasked students, and sometimes a quarantine is not necessary.

Talbert showed there have been only 140 positive COVID cases and 554 quarantines within a student body of nearly 8,300 across the entire Canton school district. He also said a staff of 1,400 has had 33 positive cases and 18 quarantines. "We want to keep schools opened," Talbert told the audience.
Asked how the district is helping those students who are behind catch up, Talbert said the students are getting tailored instruction and after-school programs are available.