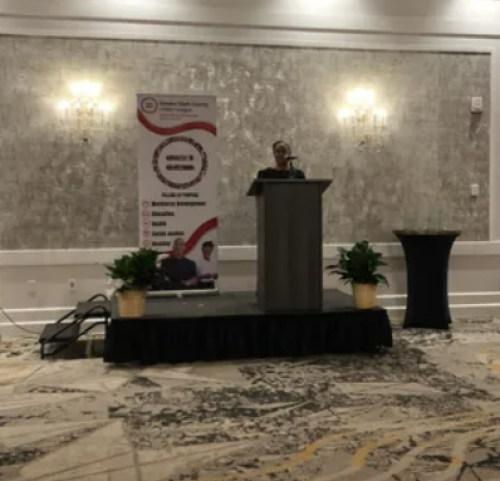 CANTON – Supporters of the Greater Stark County Urban League marked the organization's 100 years of helping area residents get employment, housing and education and channeling their voices for social justice.

Roughly a couple hundred people attended the association's Black and White Gala at the Doubletree by Hilton Canton Downtown. The event is the organization's largest annual fundraiser of the year.

State Rep. Thomas West, D-Canton, who was the event's emcee and honorary chair, talked about how the Greater Stark County Urban League, then the Canton Urban League, helped him 25 years ago. He said the Urban League's workforce development program gave him leads that helped get established as a licensed clinical social worker in the mental health field.

West briefly discussed the Urban League's history where a man named John Crawford, who worked for the local Housing Authority agency founded the Canton chapter in 1921.

Canton Councilwoman Chris Smith, D-4, said the Urban League had a program that taught her job skills that led her to being an entrepreneur and owner of a beauty salon.

Several speakers said that despite everything the organization has accomplished, deep needs remain in the community.

Board President Ralph Lee said that the county has 6,000 jobs and "we're going to die trying to fill those jobs. ... the Urban League is still here to serve you."

The organization's president and CEO Diane Robinson said much has changed in a century but "we have the very same needs."

The need for an organization like the Urban League to be advocates of disadvantaged people in having full access to voting, access to the latest technology and education "so we're not behind as others advance." She discussed what the Urban League did during the pandemic to get people cleaning supplies and hand sanitizer and to get access to COVID vaccines.

State Sen. Kirk Schuring, R-Jackson Township, talked about his past service on the Urban League board and his relationships with other board members.

"We didn't see skin color. We were color blind. We were brothers and sisters," he said.

Keynote speaker Kendalle Cobb, associate chief of staff of the Cleveland Clinic, talked about wages for many workers being insufficient to lift people above the poverty line, the lack of grocery stores and healthy food in many urban areas, 45% of people paying unaffordable rents, the lack of affordable housing and available child and the lack of access to affordable health care.

"We're asking folks to do the impossible without giving them the resources," she said.

She also talked about the unconscious biases that prevent many people from getting ahead in their careers.

"I am grateful for the work of the Greater Stark County Urban League when you think about workforce development. Helping to make sure that people are prepared to work," Cobb said.